skip to main | skip to sidebar

Harlem 2007.
I'm moving back to Harlem but I feel like I'm entering Harlem v.2.1 All the blocks look like they've received updates, almost like automatic updates on your computer. Everyday something new keeps cropping up or coming down. will harlem's face lifts beat michael jackson's?

The most obvious change seems to be housing. Since my initial move in 2004, it seems like every avenue and every block has a new condo (with awesome names like SoHa118, The Amanda, The Blake). The NYTimes had an article about buying up in Harlem and everyone is buzzing about what's new and under construction.

The concentration of most of these changes are from 110th street up till 135th Street, from St.Nick's Avenue to 5th Avenue. here's my quick little map of new condos I've noticed in my neighborhood. 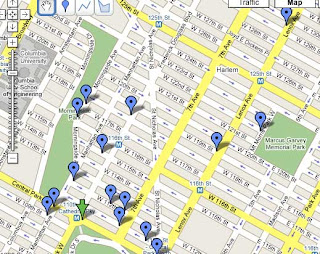 It's alarming to see the process happen so quickly over the past 3 years. The condos, the big stores, the banks, and now, a medical school.

I have no doubt that this medical school will do wonders for the health of Harlem. The mission of the school is to train and to serve minority populations, particularly in Harlem.

i have a sneaky suspicion that though this might be a nice goal, there may be a lot of damage done to get there.

-----
The new Touro College of Osteopathic Medicine (TOUROCOM), slated to open in the fall of 2007, will be New York's first new medical school in nearly 30 years and the first osteopathic college of medicine with a special emphasis on training minority doctors.

"There is a need for a medical school in New York City to serve minority populations and the underprivileged," said Dr. Lander. "TOUROCOM will function as an integral part of the New York City/Harlem community and work with the community, local schools and other colleges and universities to promote the increased availability of medical services in Harlem, the study of medicine, and to deliver osteopathic medical services in a variety of settings." 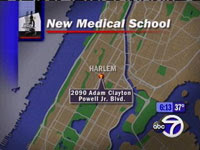 So far, the school has received 800 applications for an opening class of 125, but few of the applicants are qualified minorities -- a problem that the College aims to rectify. It plans to recruit from minority populations, working with elementary schools, junior high schools and high schools in Harlem to encourage students to major in science and consider a medical career. Most clinical training will take place in Harlem and other underserved areas. Graduates will be encouraged to remain in Harlem to practice medicine.

According to school officials, the percentage of medical students of African-American and Hispanic backgrounds is very low and getting lower, and the number of American-trained medical residents in Harlem area hospitals is well below 50 percent. Additionally, Harlem has been designated by the federal government as an area short in physicians, according to a report by the Center for Medicare and Medicaid Services.

20 years earlier:
Harlem 1987.
people's forecasts of gentrification in harlem
-------
IT is not the first struggle over the gentrification of Harlem and it certainly won't be the last, but new battle lines in the war were drawn last week when David N. Dinkins, the Manhattan Borough President, condemned a city plan to turn over 45 empty buildings there to a white construction company to develop 900 units of new housing.

Mr. Dinkins said the proposal ''opens the way for widespread gentrification of Harlem with no promise of improvement for present residents.''

''If you talk to 10 different people in Harlem about white gentrification, you're going to hear 10 different versions,'' said Mr. Brooker. ''I don't see a white takeover. There are isolated incidents of whites buying brownstones in certain neighborhoods, but they are limited in numbers to such an extent that they in no way could be considered a gentrification threat. It's inevitable that you're going to see whites moving in, as the area stabilizes itself, looking for the bargain that Harlem is. That's just good economic sense.''

Still, while the city and churches and civic-minded development companies struggle to refurbish and erect affordable housing, be it condominium or rental, other owners and investors continue to play the real-estate speculation game. Both blacks and whites are holding privately owned buildings off the market or flipping them repeatedly in anticipation of that gentrification potential that has made many local residents at once hopeful and scared.

''I have mixed emotions,'' said Inez Dickens-Russell, who, with her father, owns Lloyd E. Dickens Real Estate, a successful family business based in Harlem since 1925. ''Economically, it will raise our base, yes, but how many of us will be able to stay? I feel safe in Harlem. I don't know if I'd feel safe in a white neighborhood.''